skip to main | skip to sidebar

Comparison between Ballparks of Cartooning

My idea for comparing Russian and Japanese animation hasn't exactly worked out, and I've realized it's much too large of a subject for any adequate comparison to be made. I'm going to keep thinking on those themes and in this post, I'm going to compare two different ballparks of simpler styled cartoons, one general area that's more American, with notable sources elsewhere, in culture and one that's more Eastern European. The first is from around the middle of the 30's before it totally takes root and where the cartoony style hasn't quite been honed in and made more sophisticated. Both are very streamlined, and in some ways primitive and that's what makes them so interesting.

The uniquely Eastern European variants seem to emerge after functional cartoon designs were being thrown out right and left in the United States and it's incredibly amusing to see how these sorts of designs are both forward and backward looking. It's tough, as always, to generalize, as different features appear in different cartoons. I don't know how much the individual European styles were influenced by those from the US, especially as compared to other sources.

I'm going to show aesthetics which were prominent in hand drawn animation and their stylistic counterparts in stop motion.

First, I'll show the less familiar side of the equation. Russian animation's spins off of Western tradition, a trend which grows distinct around the early 60's. You'll notice that there's comparatively little emphasis on facial expression, aside from Maria Mirabella which was made in Romania in the 80's, which is common in Eastern European animation tradition though it's hardly an overwhelming trend. A complex mixture for sure. There's an emphasis on more solid color all the way throughout, which gives the characters a unified feeling in their environments. One thing you'll notice is the films take quite a number of queues from the more child-like sort of art styles you'd see in Constructivist Posters. Here are some examples, for those who aren't familiar with constructivism and those who are so familiar as to realize its variety: 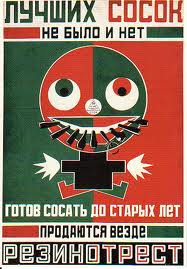 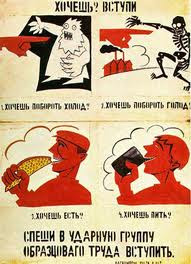 I'm having trouble telling what's Constructivism influence and what's folk art influence as they both seem to converge like they were never apart to begin with. The examples are in order, Bolek and Lolek, Maria Mirabela, Great Troubles, Kolobok, and Dragonfly and Ant.


Here are some of the pear and sphere styles in the early 30's(late 30's for Pal), popular further West. There's generally an emphasis on more fully rendered backgrounds at this point in time, the early 30's, and the characters have yet to acquire more unique design traits. The best examples are probably in the Pluto cartoons, but I'll try to pick examples that won't bore you to death. Balloon Land, Cookie Carnival, King Neptune, Philips Broadcast, and The Grasshopper and the Ants. Balloon Land and The Grasshopper and the Ants are the more representative examples of the sort of style I'm trying to pin down. But I don't want to make things look simpler than they really were, so I'm showing numerous samples from around the same time period. There generally seems to be more influence from painters than other sorts of illustrators, but unlike in more Slavic areas, the influence seems to be more in backgrounds and is probably only superficially absorbed for the characters. It needs to be pointed out that earlier in the time, these earlier styles had their own versions in Europe, which you can tell by looking at Hans Fischerkoesen and Paul Grimault's work.

The relationship between characters and backgrounds is very different from later Slavic/Eastern European tendencies. Everything was drawn at first in cartoons like Felix the Cat. Then they seemed to start getting painted, maybe somewhere around the shift to color? When that happened, it started segregating background and foreground elements. I recall from a later Looney Tune with a dumb giant that the character was drawn both as a background and foreground element. The characters aren't given the subtler paint treatment outside of what I call the skin gap.

To this day, in the age of computer animation, it's still exists more or less and it's carried over into computer skin, a stock skin for every character. In one way or another it's still a predominant trend in hand drawn animation worldwide, technologically burnt in with computer animation and with the popularity of 3D printing in stop motion, it's spreading. It's the same old story of the two way gap between art and animation. You have to simplify your characters for animation or cut out their motion to focus on the art. With motion it leads to stupidly simple textures that make characters look alike and with art it's stock movements that belong in pre-film animation novelties like thaumatropes. That's a huge helping of generalization, however, and you can have the same character work better against one background than another, so I'll stop running my mouth.

And a song for the present state of hand drawn animation, here's my poor, twisted rendition of Frosty the Snowman:

Slushy the snowman, is melting on the whole.
He's engaged in a fight and is held uptight by the same robotic bull.
Never mind that he took out the snow under other folks in town.
He made his own auto back scratcher now it's pushing him around.

The bull he can't do anything without Slushy around.
And it drains his drink to stay afloat, I think, with a big loud slurping sound.
That poor old cruel Slushy, woe, oh what is he to do?
"You've gobbled too much snow for yourself but I've grown attached to you."

Even good old puppet man has glazed himself with your digital coat.
And old puppet needs your replacement parts, so now who's left to rock the boat?
Disregard that better Painter Snowman who's somewhat attached to me.
I try to leave her in the dark so that no one else can see. (I have to cut out the part about the cutouts)

I'm a market killer always laughing , try to keep my figure round.
And if the robotic bull tries to kill them too, a childish whining sound.
And the mean live action tenant here we have but cannot trust.
He tries to get under our skins while helping make the progress we don't want to make but must.

You've gathered some snow to help me get up and go? Well then,
I'm old and I'm ill, going over the hill, be back in form some day!
-end song

That's probably the lamest song ever written, but it takes some silly lyrics to convey the absurd present state of animation media. Sing it to the tune of Frosty and put in some conscious deviations and you'll have a rough idea of how it goes. If I feel like embarrassing myself, I'll sing it.

The pictures aren't mine and I got them from searching on the net. I'd better get this thing posted or I'll keep procrastinating. I feel like I could have done it a little bit better and probably stretched the balloon a little too much to make the comparison fit. While I didn't get to that post I'd wanted to on Russian and Japanese animation, you'll find a bit to compare between the two in the next post.
Posted by GW at 11:01 PM

GW
I'm GW from Spokane, Washington, USA. I have two active blogs, one for sharing ideas and the other for animated films.